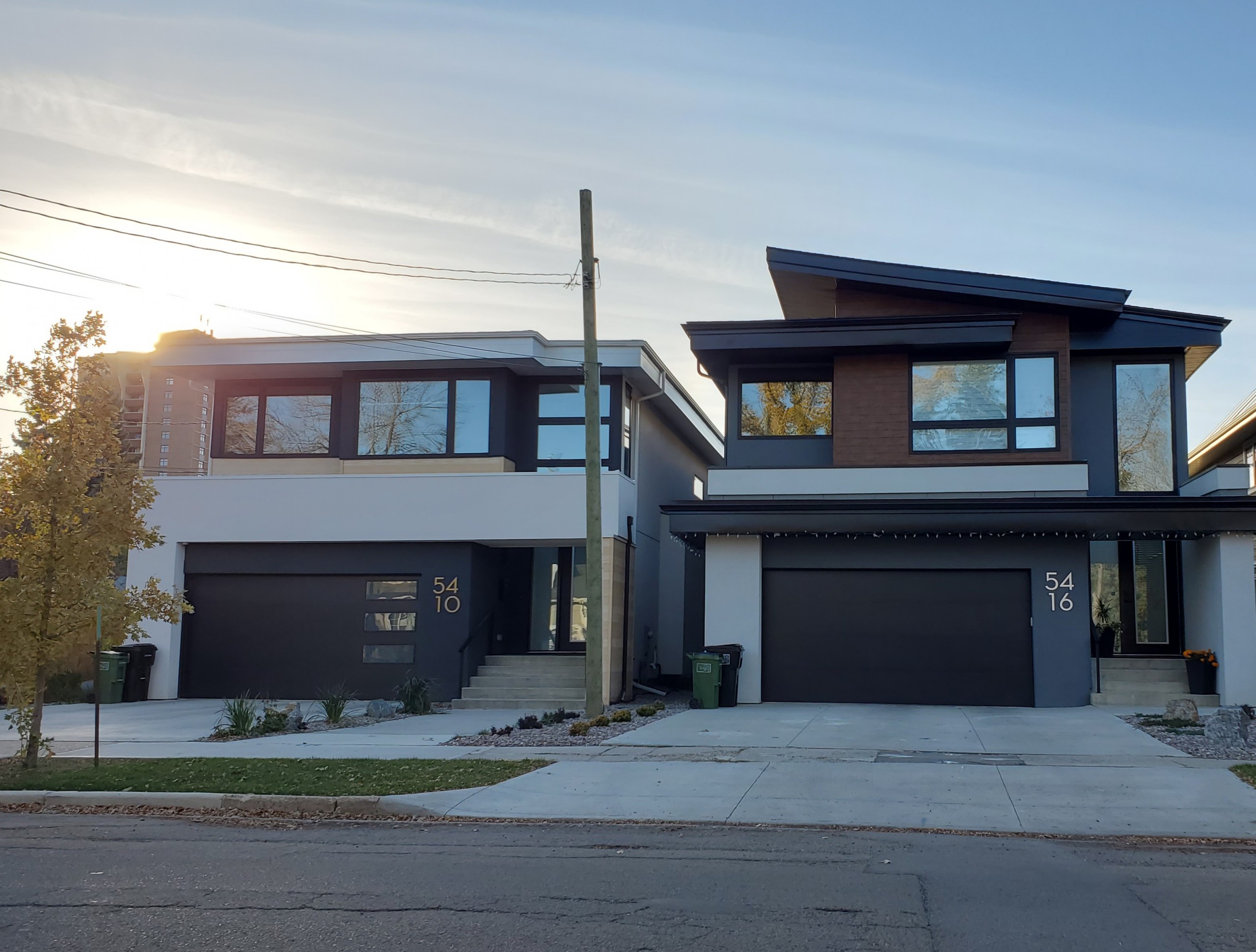 So what do you think about all this infill?

My husband and I live in a neighbourhood with a lot of infill happening, so we get asked this question all the time!  As REALTORS®, we understand that housing changes and evolves over time.  From the 1940’s post-war homes to today’s modern infill properties, our city and our neighbourhoods are always changing.  As homeowners, we  understand this as well, but now that infill projects are happening beside and behind our own home, we’re forced to consider the question from a much more personal perspective.

We’re fortunate to live in the mature neighbourhood of Pleasantview.  We’ve been hear for over two decades now and couldn’t imagine living anywhere else.  Every neighbourhood has its special features. Some of the things we appreciate about Pleasantview are the  quick access to downtown, Southgate Shopping Centre being just a 10 minute walk away with an LRT station as well, and the short drive to get to the river valley parks.  It’s also a 5 minute drive to our office at Schmidt Realty Group!  In recent years the addition of bike paths along 106 Street have been another wonderful bonus of our location.  We also appreciate the large lots and it’s one of the reasons we chose to live here.  Our home was built in 1969 and sits on a large lot… but not as large as the original lot it was a part of.  After the war, veterans were given the opportunity to purchase huge lots in this neighbourhood. Our lot, like many others in the neighbourhood, measures 75 feet across the front, and is 128 feet deep. Imagine that being just a quarter of the original lot!

With lots of this size, Pleasantview has been on the radar of developers for a good while.  Prior to changes in subdivision rules for mature neighbourhoods, these lots were usually used to build one new larger single-family home.  You can see many of these along 109 St as well as 110 and 110A Streets.  In more recent years lots of this size are being purchased and sub-divided into two 37.5-foot-wide properties for two homes to be constructed. People often think of these as “skinny” homes but actually they’re not.  A true skinny is built on a 25-foot lot, usually the result of a 50-foot lot being subdivided.

Homes built on a 37.5-foot-wide lot have more capacity for varying floorplans as the width provides another 12.5 feet for a builder to work with.  Many of these infill properties have been built in Pleasantview and while they’re creating a lot of construction, they’re also adding to our community by bringing in new and often younger families to this mature neighbourhood.

As a REALTOR® I’m often asked by neighbours what I think of all the infill.  I’ve always felt it was part of the evolution of a neighbourhood to change, and so my response has always been that as long as the homes are attractive and well built, I think it’s just fine!  The infill situation got a whole lot more personal this summer when the lot beside us as well as the lot kitty corner to us and the lot behind us were all purchased by developers.  Will my acceptance of infill hold up when it’s this up close and personal?  I admit, it was hard to see all the trees go down in the vacant lot next door. We’d enjoyed a view of our urban forest for years, but we knew that one day the owners would choose to sell, and everything would change.  What we didn’t anticipate is that our neighbours behind would do the same thing at the same time!  We’ll have 5-6 homes going up around us in the next couple of years. Yes, that’s a lot all at once. But is it really any different than what homeowners experience when they purchase a brand new home in a new subdivision?  Not really.  It’s just not what we’re used to in established neighbourhoods, and not what we anticipated when we purchased here years ago.

So now we come back full circle to the story of our own home.  When it was built in 1969, it was built on a subdivided lot. The original huge lot was divided into half, and then one half was divided again, creating 3 lots where there had once been just one.  Our house is a concrete house with a flat roof, not typical for the neighbourhood, and I have to wonder what the neighbours thought about it when it was being built.  So, when I’m consider my feelings about infill properties, I have to recognize that I’m sitting a 1969 version of today’s infill property. It would hardly be fair for me to be anti-infill given the circumstance, so my husband and I are choosing to embrace the change. We’re looking forward to our (many) new neighbours and anticipating the wonderful addition they’ll be to our community.  As I write this, as if to remind me, Walter is just walking by our house. Walter is one of our new neighbours and is a delightful canine addition to the neighbourhood.  Without the most recent infill project, Walter wouldn’t live here, and he and his two-legged family members are turning out to be wonderful new neighbours. Thanks for the reminder, Walter 😉

The Stories behind the Stats: October 2021